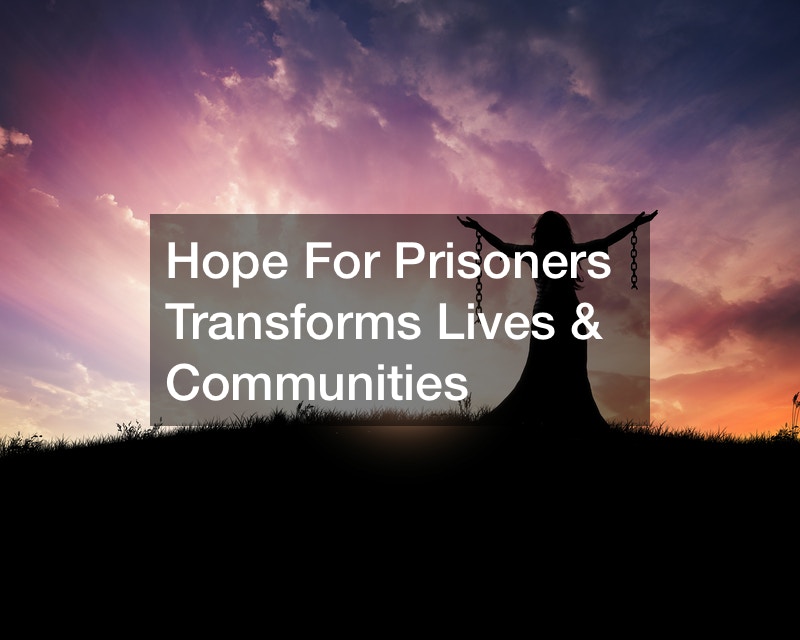 There’s little doubt that reentry into society after being in prison can be difficult. Thankfully, many organizations, including Hope For Prisoners, offer the formerly imprisoned chances to support themselves and become productive members of society.

The Importance of Reentry Programs

American jails and prisons hold more than 2 million individuals at any one time. What’s more, is that nearly all of those people will go back to their communities once their sentence is complete or they have been found innocent. In short, it means up to 10 million people annually return to their communities.

That’s where reentry after prison comes in. The justice system succeeds when steps are taken to ensure those returning home from prison can contribute to society. Based on the sentence imposed by a judge in an individual case, a community’s resources, and a person’s desire to change their ways, there are three main types of reentry.

The first kind of entry is where an individual is under government supervision and support when they are released. This is usually done through parole or probation. People released under this type of reentry must meet a set of conditions imposed by the court system and are supported by a probation officer.

The second kind of reentry is where a person released from prison voluntarily enters a government or community-based program. These programs provide support services, and they have been found to help reduce future crime while helping folks become productive in society.

The third kind of reentry after prison sees a person released from prison without any supervision or community program support.

Believe it or not, research has found that successful reentry into society begins right when a person is incarcerated. While in jail or prison, a person can build positive relationships, develop a better worldview, and address mental health or substance abuse concerns.

Putting in this kind of work can pay big dividends down the road for both the prisoners and for the mentors and officials working with them. With the education they receive in prison, they can find a place to live, seek meaningful employment in roof repair, the foodservice industry, or any number of other occupations.

The knowledge they gain can also help the recently released become contributing members of society, and Hope For Prisoners offers great leadership training for people in their programs. The workshops offered by Hope For Prisoners cover important everyday topics such as:

Across the country, there are hundreds of helpful organizations, such as Hope For Prisoners, that are looking to equip those going through reentry after prison with all the life skills they need to succeed.

Hope For Prisoners has proven to be very effective. The organization’s 18-month reentry program provides mentoring, job placement, and pre-vocational programming. One of the best things about Hope For Prisoners is its strong relationship with the local Las Vegas police department. In fact, studies have found that at least 64% of the program’s participants found stable employment once they graduated from the program.

So, what does successful reentry after prison look like? There are four elements that have been found to help prisoners be successful when they return to their communities:

Prepping Prisoners For Life After Prison

During reentry after prison, it’s important to help those recently released construct strong relationships. They can do this in several ways. They can find mentors, perhaps friends or family members, who can offer both practical assistance and advice. Folks should also look to reunite with their families and rebuild any relationships that may need to repair. They might also work to develop communities once they return home, building up a support system of friends, family, and maybe even members of their local faith community.

One of the best things to be done for ex-prisoners is to plan ahead. Help prisoners make plans for when they are released. In the short-term, that might include setting up food, clothing, and lodging for their first night after release. In the long-term, that might include getting them a job in metal fabrication, plumbing, or another line of work. Over time, it might also include finding a way to look at mortgages to get them their own housing.

Another thing to do to help ex-prisoners is to locate resources that can be helpful. Many resources can be found around a local community, including churches, government agencies, organizations such as Hope For Prisoners, and even local schools. If, for example, an ex-prisoner wants to go back to school or further their education, they can look into classes at a local community college, which might offer technical training for them to find steady employment for careers in welding, as insulation contractors, or in numerous other technical jobs.

The mission of Hope For Prisoners is simple: it’s all about giving hope and helping with reentry after prison into society. It gives hope to those who have been in jail or prison and feel that all is lost. The organization offers a fresh start to those looking to head down a better path.

Hope For Prisoners is a source of hope for ex-prisoners by assisting with reentry through long-term services and support. The founder of Hope For Prisoners, Jon Ponder, had many challenges upon returning to normal life when he was released from prison. His personal experiences overcoming challenges led him to found the organization, which helps thousands of people every year.

Hope can change lives, but a big reason for clients’ success is their commitment to wanting to change. Part of that change includes having a better relationship with law enforcement and understanding the vital role that it plays in the community. This understanding about who members of law enforcement are and what they do, helps clients overcome any fears they have about police and helps them build respect for people in law enforcement positions, such as 24 hour bail bondsmen.

As you have read, Hope For Prisoners works to help clients change their lives and empowers them to create a better future for themselves and their families through training that encompasses many important parts of daily life.

The pre-vocational leadership workshop is required to be completed by all clients as part of their reentry after prison and covers a variety of helpful topics:

All of the skills provided by this workshop can go a long way in helping a client find a job. If someone is looking at a career in air conditioning repair, this workshop can provide the skills that will help them work hard, work effectively, and work smart. The same can be said if someone wants to go into home remodeling, which can be a very lucrative career. In fact, about 35% of remodeling jobs involve a homeowner’s entire house.

The Hope For Prisoners professional development training gives clients critical skills they need to have everyday success in life and when they find employment.

The course teaches positive leadership, team building, problem-solving, and dealing with and resolving conflict, among other skills. The training also covers training in technology, including typing, proficiency in Microsoft Office programs, guidance in IT careers, and how to use email, among other important, good-to-know skills. These are all great skills to have if a client is interested in working at a law firm, which usually involves a lot of desk work and attention to detail.

The Hope For Prisoners Impact

It’s easy for organizations to use buzzwords and highlight talking points about what they do. But Hope For Prisoners talks the talk and walks the walk. When the organization talks of hope, successful reentry after prison, and making client’s lives better, the results are there to back it up.

Year after year, there are stories of successful reentry after prison by clients who have taken the lessons of Hope For Prisoners to heart and used them to better themselves.

Take HFP graduate Cornell Wilkins for example. Cornell’s life of crime began as a juvenile and lasted until 2013. For decades, he was locked up and unwilling to respect authority and abide by laws. Finally, in 2003, Wilkins made a promise that he was never coming back to prison. Over the next 10 years, he educated himself, took every program offered through the Department of Corrections, and even learned two languages.

After being released, he eventually got connected with HFP and knew he was in the right place. As long as he showed up and asked for help, he knew that the staff was willing to work with him. Five years later, he’s graduating with a Bachelor’s degree, is pursuing a higher degree, and has never stopped dreaming big.

Stories like Cornell Wilkins’ are plentiful around Hope For Prisoners. These are stories of real hope that show even the most skeptical people that change is possible. Understandably, many ex-prisoners wonder what’s coming next when they get released from prison, and they may not even know where to begin. Organizations like Hope For Prisoners offer the necessary guidance for men, and women, young and old, to turn their lives around in ways they didn’t think were possible.

There is life beyond prison for ex-prisoners, and a multitude of resources are available. Organizations like Hope For Prisoners offer resources and time to help the recently released find success in life and become productive members of society, living happier lives and leaving their old prison lives behind.